Grafton Becomes A Part Of History at the 148th Open

Posted date over 3 years ago Posted by Staffline Team

It is the dawn of a big week in Northern Ireland's history as the 148th Open returns to our soil for the first time in over 65 years.

Royal Portrush hosted the 80th Open in July of 1951 with Max Faulkner winning the championship. Wilma Erskine is hailed as the mastermind behind the slow burn of bringing the Open back to Royal Portrush "Around 2006, there was really nothing on the horizon, so a small group of people here formed a tournament committee to look at events we could aim for, both amateur and professional,'' Erskine said. "The ultimate dream was The Open Championship. We all thought it was a dream, but let's put it down as something we'd like to achieve.''

Now 13 years later that long-held dream of so many is becoming a reality with one of Northern Ireland's shining stars, and four-time major champion, Rory McIlroy celebrating the chance to play a major on his home soil: “The Open returning to Portrush is massive for Northern Ireland, everyone is so excited and is getting behind it. I never thought I would have the opportunity to play in a Major Championship at home and I'm really looking forward to it. You can really feel the buzz here already, it's going to be a fantastic year as we get ready to welcome The Open for the first time in over half a century.”

This marks only the second time that the championship has been played outside Scotland and England in the 150 years of the competition and enthusiasts are flocking to Portrush in droves from all over the world with tickets selling out in record time. R&A executive director Johnnie Cole-Hamilton said the speed of ticket sales "clearly reflects the desire among fans to be part of this historic occasion." 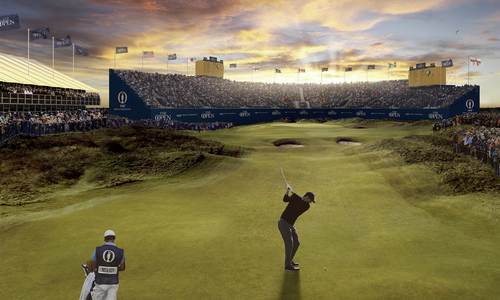 156 players will compete for the Claret jug with an estimated 240,000 plus spectators to attend over the three days.  Hotels across the county have been fully booked for months. The local economy is set to boom with the influx in tourist traffic.

It is not just the local economy that is set to benefit from this prestigious event. Suzanne McGonagle of the Irish News predicts that over £80 million will be added to the Northern Ireland economy with "the economic benefits of the tournament will spread further than Portrush with golfing fans expected to visit venues across the region to stay, as well as keeping fed and watered."

We here at Staffline Recruitment have also been doing our bit to help this epic championship along by supplying over 1,500 catering and hospitality staff for the event. Touted as the biggest ever sporting event to ever be held in Northern Ireland, we are thrilled to be a part of such a celebrated and historic event.

Keep an eye on our social channels for all our updates from the 148th Open.