It is an extension of its partnership deal with the Irish Football Association which already sees Northern Ireland’s largest recruitment company support the association’s mission to promote, foster and deliver football for all in various ways.

Tina McKenzie, Chief Executive of Staffline Ireland, said: "Staffline is proud to partner with the Northern Ireland senior international women's team, who have proven time and time again to be exceptional ambassadors for young football fans. The squad are testament to the ability of sport to transcend all barriers, proving nothing is impossible.

"At Staffline we focus on placing talented people into work while supporting individuals to reach their professional ambitions. We work to inspire, motivate and lead, which clearly aligns to the values of the Northern Ireland team.

"Given the recent excellent performances by the team I look forward to seeing them go from strength to strength while entertaining the fans and aspiring future players. Staffline will be supporting them all the way."

Staffline already sponsors the Family Stand as well as the big screen at the National Football Stadium at Windsor Park.

And the company provides employment services to the association. It supports the Irish FA’s Let Them Play youth strategy by managing the recruitment and employment of more than 80 coaches and casual staff to provide summer football camps and small-sided games centres across Northern Ireland throughout the year. 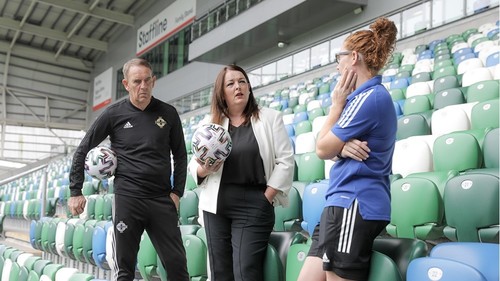 Northern Ireland senior women’s team manager Kenny Shiels praised the deal: “I’m delighted that Staffline will be supporting our journey in growing women’s and girls’ football in Northern Ireland and we look forward to them backing our team.”

And Northern Ireland captain Marissa Callaghan added: “It is great to have this backing from Staffline. Women’s and girls’ football is on a real high in Northern Ireland so we’re excited about having them on board.”

“Interest from current and prospective partners is on the up and we look forward to working with the team at Staffline in the run-up to next year’s UEFA Women’s Euro finals and the years ahead.”